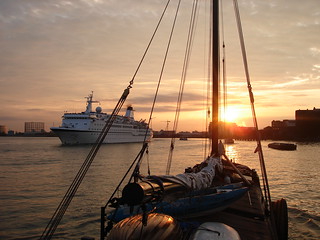 05:30 Friday 1st August and the moorings was a buzz. Four of our barges were away to Faversham for the Kentish Sailing Association’s 42nd Swale Match. It was the first down river trip for crew on Ederlezi so we had agreed to go in convoy. We hadn’t got as far as Greenwich when we were pulled to one side by the Port Of London Authority to give way for cruise ship Berlin. Huddled on the side of the river, we felt small and insignificant as this giant breezed by us under her own steam dwarfing even some of the buildings on her way to berth next to HMS Belfast. 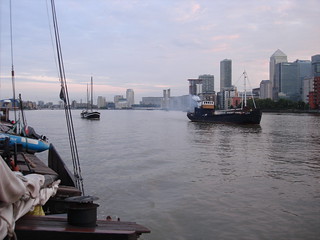 No two trips down the river are the same. However, this one will be remembered due to ‘Steam-boat’ Hans. Shortly after passing Greenwich she started running hot and pumping out lots of grey smoke, even after an emergency drop-off of oil from Albatros things were still not looking good. For a while we lost her behind one of the numerous bends of the river, unsure if she’d given up and returned home. Luckily as the river started to open up, she came into view, slowly chugging along still encased in this unusual puff of grey. 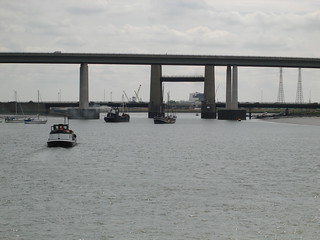 We took the short way around the Isle of Sheppey, through the Kings Ferry bridge and along the windy swale to meet up with fellow hermitage resident Stormvogel and other Swale match competitors moored outside Faversham creek. 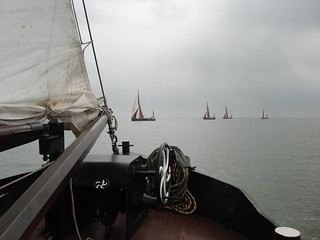 Race day came, and another early start. Although only one boat, Twee Gezusters, was competing from Hermitage, onboard were representatives from four, including Albatros’ skipper who was taking notes ready to provide fierce competition next year! The wind started off light which meant we were drifting more than racing. The slow start meant we had to apply for a change of course due to our second mark being out of water at the time we were due to reach it. Not deterred we rounded an imaginary mark and joined the fleet of homeward bound yachts. Including Pudge, who came to visit us as part of the open day in June.

All in all it was a good day. Big thanks to our crew, who helped Twee Gezusters come first in Class 6 – Dutch Barges, winning it the Jack Pawsey Trophy and another beautiful green pennant.

Details of the Swale Match can be found here, and further photos are available in our flickr album.

About the Author: Islay